As a Windows user (did you click away yet?), I don't have access to all the cool utilities that Mac and Linux users have. One of them is a simple tray app that my colleague has on his Mac: SSH Keychain. On Windows we got PuTTY to do our bidding, however, it lacks the simple (and separate) tunnel management of SSH Keychain.

How often don't I just want to open a tunnel to some server (that I'm sure to have in PuTTY) without opening a full SSH terminal? Or, isn't it annoying that every time you open a terminal session in PuTTY, all tunnels related to that session open as well?

So, in this first post, I'm just going to promote a little app I wrote a few weeks ago: PuTTY Tunnel Manager. I made the interface similar to SSH Keychain and it also has roughly the same features. 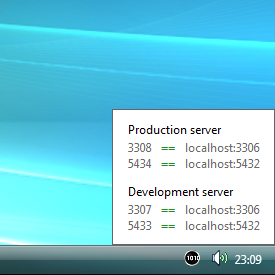 I wrote the app in C# to brush up my skills a bit and used the excellent Visual C# Express Edition for development. The sessions in PuTTY Tunnel Manager (PTM) are read from the Windows registry, where PuTTY normally stores them. PTM has an option to move all the tunnels from PuTTY to its own settings. This allows you to use PTM just for tunneling, and PuTTY just for terminal sessions.

Opening tunnels is easy, just 2 clicks away from the system tray. Using Pageant for secure and easy login, and done: I can connect to the databases on our development server. Left clicking on the icon shows me which tunnels are currently active and PTM warns me when I try to open multiple tunnels that are listening on the same port.

I made the program available via Google Code. So you can get PuTTY Tunnel Manager there! That's it! I hope you like it.

If you found this post useful, funny or whatever, let us know without writing a full comment!